Handmade knitted in Salta and Jujuy at northwest of Argentina 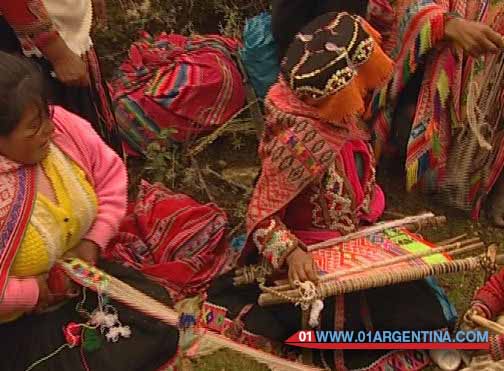 The Handmade knitted is associated vicu??a, among us, weaving communities of northwestern Argentina and specifying further, tradition is limited to Catamarca, in whose high plateaus is the “habitat” of the Vicu??a.
Regarding the silky fabric of this animal, Cieza de Leon wrote these words full of wonder: “The wool of these vicu??as is excellent, and all that good which is thinner than the Merino sheep from Spain”.
Remains of pens, from very early times, such as those found in the Peruvian Andes (between 6,000 and 4,500 BC.) Make us think that if for centuries were already concocting tissue elements in crude vegetable fibers, the nearby presence of these animals must have motivated the use of its fibers.

And not only their skins. But we are unable to determine when this phenomenon occurs.
Certainly from the domestication of some of these animals man’s relationship with respect to those left in the wild must have been transformed.
The path followed by llamas, alpacas and a hybrid, the pacolama, will be very different from those who might have the guanaco and vicuna. The first were adapted as suppliers of wool, meat, or for transportation in the difficult and intricate Andean geography. Belonging to the wild vicuna world, not to occupy space in everyday life, not adapt to captivity, he acquired an estate hierarchical superior to the other llamas.
With regard to their social space, the chroniclers of the Incas (including Guaman Poma) tell us that all wild camels belonged to the Sun This herds belonging to the deities give them a presence.; different with respect to other animals, placing them as directly linked to supernatural elements.
Flores Ochoa collected between communities in the area of Cuzco and Puno concepts that demonstrate that these animals are the sole ownership of the Apus, spirit and gentlemen of the mountains, and men do not have absolute control over them but the obligation to care for and use.

Among our old countrymen Northwest is the Coquena god or Llastay the sole owner of the vicu??a and protecting them from predators. It all comes together to think that the Incas had regarding this animal Auri consideration that lingers in some places.
“In Inca times, when hunting in the mountains had become almost real privilege, King beaters around thousands of deer, guanacos and other animals, and herded to a central point. The chroniclers say so unanimous that no it killed most of them. they claim that the vicu??a, which have always been rare, never were given death unless they were old. a captive animals they are sheared, releasing females. Cieza explains the prohibition killing females claiming that an ample supply of wool is needed. A deer, guanacos males and other animals ate them, making jerky with your card.
By their own qualities and the scarcity of its fiber, vicu??a appears as providing material for pieces of very high bill from the time of Paracas, in the first millennium BC. Then, successive cultures that are present in the findings of the Peruvian coast, especially very fine pieces Nazca and Wari-Tiahuanaco indicate appreciation that the community gave him.
The difference is established not only in the appearance of clothing, but also in the material of manufacture, marking the different hierarchies, “the Inca, and high, dressed in tissues of vicu??a, alpaca or llama wool selected. Reviendo chroniclers, John V Murra stresses that within the remit of the Inca, son of the Sun, was that of being the sole possessor of vicu??a garments; This tradition comes through information gathered in the work of Inca Garcilaso, Cieza de Le??n, Pedro Pizarro and father Bernab?? Cobo, so was real membership that whoever vistiese vicu??a clothing without permission of the Inca was punishable with death penalty.
Privilege king, only he could authorize its use among relatives or loyal chiefs if deemed worthy of such perks.

His clothes, by extension of the divine nature of the owner, was burned after being used as some chronic, unless it decides to give Inca other purpose.
The fine shirts uncus calls had a rigorous symbolism. Checkered designs, figures were probably similar to the language value, adorned these garments.
Also among the elements had touched attributes reserved solely for the use of the Inca, as they were called llauto the headband, red wool pompom called mascaypacha and feathers of the sacred bird, corequeque.
The subjects were so far from him, that if some events took them to his presence, were to appear in humility, with downcast eyes and carrying a load of wood on the back.
The creator god, myth, is so identified with the Inca, who acted as mediator between the world of men and the sky, assimilating himself to the sacredness of the center of the world, your navel, since it means Cuzco Quechua word. “In Cuzco was the sacred mountain, ie that point that allowed the union of earth and sky and ground, the three planes in the world” and also the Inca was an axis mundi, a reference to the center of the universe.
This precious fiber of a wild animal, but familiar to our north, was the material relating to the completion of the finest pieces of traditional Argentine costumes.
The point Poncho
The poncho, with its simplicity and elegance, is a synthesis of the Andean heritage, and apparently, would originally from Argentine-Chilean mountain areas.
His American lineage was confirmed by researchers. Among them, Dr. Salvador Debenedetti, who found in a natural grotto of the San Juan Mountains one of the most obvious evidence of the existence of prehispanic poncho.
In Angualasto, 1500 years ago, had been deposited a young woman still, “… lying and tied to a kind of stretcher, made with logs, sticks and reeds bound together by strands of wool red, black and white. the body was wrapped in ponchos faded but well preserved and pinned to the back with long spines it was covered with two ponchos Exterior well preserved, vicuna wool or large guanaco, completely enveloped;.. inside, smaller, affects form of a sleeveless shirt and covered half a length. the headband red woolen cords tied on the occiput, short black “hair.

With regard to the textile outfit, she was accompanied by spindles, punches, torteros elements to tighten the fabric, leather thongs and carved and twisted as the textile material found in this burial structures were found “… elementary and other developed with great display of technical resources originating from Ancient Peru ‘. the latter include double-sided, eccentric warps and warp face.
The poncho became a favorite garment of Spanish riders since shortly after his arrival in this land that covered the need for shelter as well as possible the freedom of movement.
It is likely that the Jesuit mills established in Chile have been one of the diffusers centers poncho, because since there were exported since the beginning of the seventeenth century until the expulsion of the Company. Another source of production of this piece were the families of weavers in northwestern Argentina.
Before the end of the seventeenth century, the poncho was already part of everyday dress in Upper Peru, but will the eighteenth century the era of its popularity in the Andean space.
In the history of the laws of the conquerors regarding the dress of the Indians, we see the poncho joined the life and customs of the mestizos. This character of both worlds can choose both the Spanish saddle as the Indian garment as part of these two universes.
In the seven grew a visible admiration for the Inca Empire. Harbored dreams regarding the restoration of his empire, reflected in the tables, with their family trees, did descend into the Creole families of the mythological kings of Cuzco.
The poncho was made “to the Indian”, plotted as before, with one warp to the entire piece so no edges chopped strand, according to the layout of the owner will be dour or take beautiful fringed or be covered with flowers embroidered fashionable.
By that time we have communities of weavers who inhabited our northwestern provinces making up parts requiring new forms of life: blankets, bedspreads, blankets, etc. The introduction of Spanish in the sixteenth century loom in this area joined the Aboriginal long tradition “… an apparatus which could be woven wide and many meters long fabrics. However, why not waned native loom. The poncho, dress fabrics indigenous staff continued to be woven into it … “.
In the early nineteenth century, the poncho was present in the preparation of the liberation campaigns. “During the time of independence, the expeditionary armies Ortiz de Ocampo to Alto Peru, Belgrano to Paraguay and northern later, and the Andes, passing through the towns of the interior, receive donations consisting of real horses, mules, blankets, ponchos cordobanes and foremost. ”
Catamarque??os vicu??a ponchos were considered the most representative of the native tissue. Martin de Moussy was amazed as beautiful pieces woven as simple instruments, noting that the Argentine loom was extremely primitive, “… it is the same as served at the time of the patriarchs and the one that Arab women employed at your store. some planes crossed for laying the warp threads, one planchuela to keep separate the two ranges of thread, a scale to give the oscillations is ta planchuela. That’s all … “.
The fine woven poncho Northwest highlighting the warp that completely covers the last frame, helping the weaver with an instrument called a spade to the tissue is tighter, so that sometimes is achieved which is waterproof. This technique is called ‘face warp’ and, currently, among the weavers ‘point struck’.
Weaver vicuna ponchos, beyond fashion, chose to emphasize the material that confeccionaba garments, the prestige of the animal from which the fibers are extracted, vicu??a, whose color was easily recognizable, and the demonstration in the pledge of yarn work, hard work because this camel wool has a very short fibers:
This artesar??o, like Weaver gauze and filets of Chancay, assesses the structural principle of the fabric and art Spinner, that within the Hispanic tradition had a great social recognition. Learn what the experts say: this is an exceptional material. “Only Goats Angora Kashmir and Tibet and Pamir are comparable to the shy vicu??a whose home is in the Andes”.

The vicu??a was adopted by the ancient Andean shepherds for making ponchos that were aimed mainly the cover of the strong cold. The fabric was thick threads and considerable weight in those rustic ponchos.
Poncho and light scarf has a different function for a different life. We assume that his story about the needs of lightness is attached to a rider long ways.
The mule trains with cotton were the backbone of our exports to Chile, Bolivia and Peru for “centuries, led to the carriers by arduous passes. In this area certainly one warm clothing is needed and occupy little space when the heat noon compelled to fold. for this need, we believe, the poncho was light.
The Argentine wool poncho vicu??a is the lightest known, and long journeys was because they expected.