Discover Argentina with our Tours!

From natural wonders and dramatic landscapes to distinctive cultures, Argentina is full of unforgettable experiences and opportunities! It s always too soon  or too late  to talk about an economic boom in Argentina, because there s invariably a bust just around the corner. But, ever since the infamous economic crash and default of late 2001, the country has been relatively stable, with a growing economy and thriving tourism sector.

The weak peso initially helped both foreign and local investors inject dollars into hotel and other infrastructure developments, and also attracted expatriates to Buenos Aires in particular. The leafy neighborhood of Palermo Viejo filled up with cool hotels and boutiques, the once abandoned Puerto Madero district was turned into an exclusive riverside residential and leisure quarter, while pink dollars turned San Telmo into a gay tourism hotspot. Across the interior of the country, estancias (ranches) in the pampas around Buenos Aires and in Patagonia have been revamped while hotels have cropped up for a new, discerning wave of foreign traveler; service has improved too. 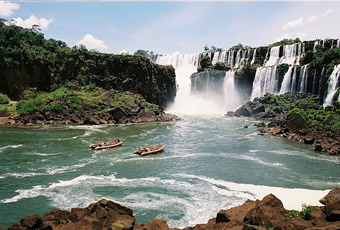 Take a tour to Iguazu Falls!

Added to this, the UNESCO-listed Iguazu Falls has evolved from being merely a sight to behold into a focus of jungle-themed vacations, while Argentina s second and third cities, Cordoba and Rosario, are increasingly attracting travelers interested in history  Cordoba was the center of Argentina s 17th-century Jesuit mission. Argentinean gastronomy has moved on from the staples of grilled meat and empanadas to embrace Andean ingredients, Peruvian flavors and international imports such as Pacific Rim cuisine. Combine this development with the basic truths about Argentina s attractions  awesome natural sights, contrasting landscapes and urban sophistication  and the appeal becomes obvious.

As Donovan Hervig of Ideal South America, says: North American travel business to Argentina is booming. Travelers are discovering a continent [South America] they ve never visited. Hervig points out that Argentina is still a novelty and attracts Americans because of its mix of European culture and South American exoticism, and particularly for its glaciers and  the best waterfalls complex in the world.