Art in the subways of Buenos Aires 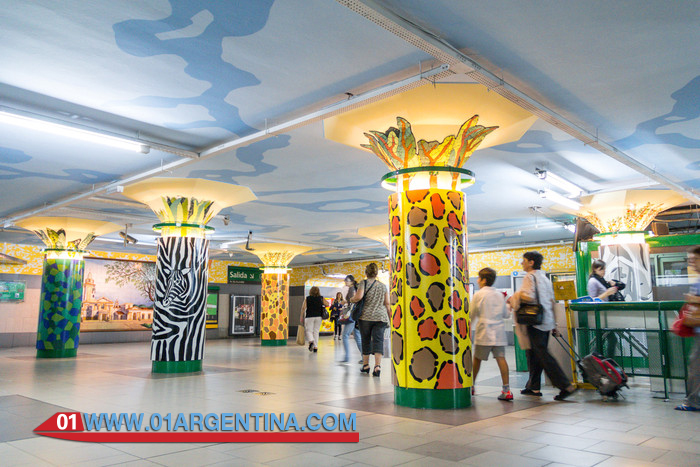 Visitors admire and photograph. The locals, lost in the maelstrom, hard to repair them. We talked about the murals that cover the bowels of the subway. New pieces by young artists living with Polesello works, Paez Vilar??, Quinquela Martin, S??bat, Quino and Molina Campos, among others. Take a second to appreciate change undoubtedly routine trip.
In the 30s, Buenos Aires was a party. The Paris of South America, as it was called, received the world with progress and expanded its subway system. In 1934, the Company Hispano Argentina Works and Finance, responsible for the brand new line C, decided to import tiles with works by Spanish artists and join them in their stations. You can also opt to take a city tour in Buenos Aires in order to understand much more about this cosmpolitan city.
Years later, with assembly lines D and E, artists like Otto Dur??, Alfredo Guido and L??onie Matthis de Villar was invited to be inspired by the legends, traditions and native customs. The result, which lives on those routes with the work of contemporary artists, including from the marriage of the Guarani in Iguazu until the Battle of Caseros or the Conquest of the Desert.
Over time, leakage and breakage of some parts deteriorated this heritage and making it an element within the seasons. But from a little over a decade, the concessionaire decided to work on the restoration and growth of that heritage. Through SubteVive program, as are 25 new murals deployed in six porte??as lines, leading not only consecrated artists but others whose primary job is drawing.
So, Rogelio Polesello (line D, station Jos?? Hern??ndez); Josefina Robirosa (same line, Olleros station); Carlos P??ez Vilar?? and fileteador Andr??s Compagnucci (line B, station Carlos Gardel) coexist with vignettes Horacio Altuna (line C, passage Lima Norte), Quino (in the same space) and Hermenegildo Sabat, which pays tribute to the “heroes “Tango in southern Lima.
Visitors photograph them, admire them and notice them. The locals, lost in the maelstrom, hard to repair them. But take a second to appreciate changes undoubtedly routine trip.

The urban interventionist and renowned artist, Marino Santa Maria, was working nights last 3 months in Plaza Italia station to surprise users with their works. To achieve the enhancement of the artist intervened station walls, ceilings, columns, floors, friezes and vaults with different techniques.
His artistic creation covers the entire season and aims to make it protagonist of all passengers of the line. The works performed were intended for anyone who is traveling on the subway can admire and feel in another area.
The criteria used to choose the works had to do with the location of each access, considering what was on the surface. That is why the next lobby Buenos Aires Zoo was illustrated with different animals and lobby that is closer to the Botanical Garden has a wild theme with plants and flowers.
In columns Zoo lobby some animals appear to this selection, the artist was inspired by the book “Animalia” by Julio Cort??zar. He also chose to paint elephants and giraffes as it believes that when one is small these are the animals most you can get attention. He also selected a stencil plates animal print motif to decorate the ceilings and hallways.
To the lobby of the Botanical Garden, used the same technique stencil on walls and ceilings but in columns made drawings of different types of flowers. The capitals were performed with the technique of trencad??s, recreating with broken tiles and plant leaves that accompany the flowers of the columns.
Santa Maria already done this type of work in different parts of the country, including the Pasaje Zelaya, the Hauz Plaza de Rio Cuarto and Lanin street. On its website describes each of his works and accompany it with a photo gallery. It also has information on courses and workshops that dictates future activities, biography and contact.
“The impact that people will feel is inevitable because when you stay surrounded by color and are not used in the city to that, you feel it. This intervention or environment is designed so that one is in the play “ended Marino Santa Maria, referring to his intervention.
Improvements in the D Line will continue and we will be telling you how we work.