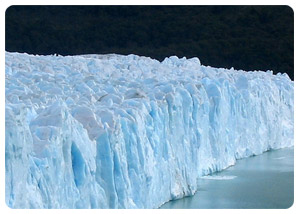 Argentina is, with 5.8 million tourists in 2012 according to the World Tourism Organization, the most visited country in South America and the second most visited in Latin America, after Mexico.
Equipped with a vast territory, a huge variety of climates, natural wonders, culture, customs and famous international cuisines, a very high degree of development, quality of life, and a well equipped infrastructure, Argentina is receiving massive quantities of Travelers. The Argentine territory extends from the highest peaks of the Andes in the west to the great rivers and vast beaches and cliffs of the Argentine Sea in the east, from the tropical rainforest of the Yungas north to the valleys, glaciers, lakes and cold forests of the Andean Patagonia in the south to Antarctica. The huge distances required in most cases air travel.
The country has the full range of possible climates: temperate, hot dry, hot humid, dry cold, damp cold, semi-arid steppe, subantarctic, subtropical …
Foreign tourists come mainly from Brazil, Chile, Peru, Colombia, Mexico, Bolivia, Ecuador, Uruguay, Venezuela and Paraguay and Europeans from Spain, Italy, France, Germany, United Kingdom and Switzerland.

once considered mainly due to the architecture, the “Paris of the Southern Hemisphere” by various travelers, offers a cultural activity. Travelers usually choose a night visit to the premises where dancing tango and a walk to a typical stay (in the province of Buenos Aires), to enjoy the traditional asado. In recent years, emerged new themed tours, including many dedicated to leading as Carlos Gardel, Eva Per??n or Jorge Luis Borges. It also has numerous shopping malls (shopping), among which stand out the Alto Palermo, Paseo Alcorta, Patio Bullrich, Abasto de Buenos Aires and Pacific Galleries.

Iguazu Falls, located northeast, subtropical jungle, are the most famous waterfalls in the entire region and its tourist exploitation has good infrastructure development, and with very different rides. There is a National Park area, where wildlife is preserved original. The most impressive waterfall is called Garganta del Diablo. Other important are called Two Sisters, or ??lvar N????ez Bossetti, in honor of its discoverer, Alvar Nunez Cabeza de Vaca. 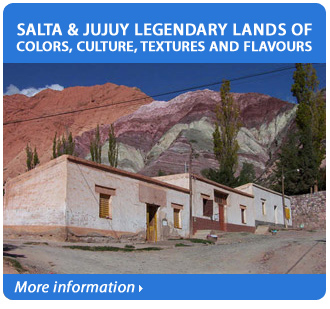 Salta, colonial architecture is a City with many tourist attractions since it is possible to take tours to other tourist points as Quebrada de San Lorenzo, Valles Calchaqu??es, Cabra Corral Dam (Dam General Belgrano), Cafayate, Salinas Grandes, Iruya (a must for Quebrada de Humahuaca and Purmamarca), Cachi (through the Cuesta del Obispo), Mills, La Caldera, Cardones National Park, or National Park King Barit??, Termas de Rosario de la Frontera. From from the city center of Salta you can take the Train to the Clouds, this unique train ride through the Puna area, an almost desert plateau with huge contrasts in its route that goes up the slopes of the Andes, in the province Salta. The service of this train was paused momentarily his service in July 2005 for repairs, quickly reactivated. Currently, the final destination is the city of San Antonio of the Cobres.

Part of the Southern Ice Field is a huge glacier that bisects Lake Argentino and cyclically blocks it until the rupture of the ice cap. It is located near El Calafate, a small Patagonian town. At any time of year there are continuous detachments of huge ice blocks, which is a natural spectacle. This glacier and its neighbors is framed by a majestic landscape of rugged mountains as Chalt??n and large lakes.

The city of Ushuaia, in Tierra del Fuego. 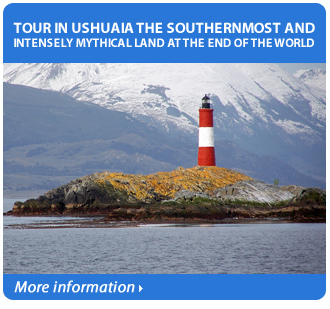 Ushuaia, the southernmost city in the world, in Tierra del Fuego, typical south destination, attracts visitors with a very important tourist excursions, gastronomy and the feeling of being literally on the end of the world. To the north of the island, the city of Rio Grande is attractive for its old quarter of wooden houses painted and subtly varies or the excellent trout fishing. Further south, the railroad is famous and it departs from the Tierra del Fuego National Park, bayside Lapataia. Ushuaia city also offers cruises on the Beagle channel, observing colonies of sea lions, and a visit to Faro Les Eclareurs, the beautiful Lago Fagnano (or Kami) or almost inaccessible in the Island where the Lighthouse at the End of the World the Fuegian forest landscape takes an almost magical during the austral autumn red color to cover the foliage of the dense forests.